Dick Fearn has 40 years’ senior management experience in the rail industry in Britain and Ireland. He served for 10 years as COO and then CEO of Iarnród Éireann (Irish Railways). With British Rail from 1973 to 1996, he had a number of rail operations roles, culminating in senior executive posts as the Divisional Director of the Thames & Chiltern Division and later the South Eastern Division of BR’s Network SouthEast. At the time of rail privatisation in the UK, Dick was appointed to the post of Managing Director of The South Eastern Train Company, subsequently moving to Railtrack plc as Zone Director of North West and later Midlands Zones.

David Horne has been Managing Director of LNER since its inception in June 2018. He has held senior positions with several train operating companies including as Managing Director of East Midlands Trains from 2011 to 2015, and Virgin Trains East Coast from 2015 to 2018. In his time at East Midlands Trains, he was responsible for delivering the UK’s most punctual long-distance services over a five year period and under his leadership the company won Passenger Operator of the Year in 2014.

David leads the Executive Team at LNER to transform train services on the East Coast route through the introduction of the fleet of brand-new Azuma trains and working in partnership with Network Rail to deliver an infrastructure programme valued at £1.2 billion. David is passionate about customer experience, improving the railway network and generating sustainable growth.

David grew up in Cornwall where he started his railway career before studying transport management at Aston University. He now lives in Nottinghamshire with his wife and their two children. 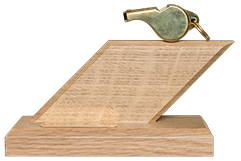 The Golden Whistle awards – in which the trophies feature that archetypal element of efficient railway operating, the Acme Thunderer whistle – celebrate the best of railway operating and are handed out to those companies making the greatest strides in punctuality and other key indicators.

• Minimising delay minutes – operators. Golden Whistle for best in class, Silver Whistle for most improved. All TOCs and FOCs assessed for reduction in ‘TOC/FOC on self’ delays, moving annual average to end of Period 9.

• London Underground Line performance. All Lines assessed for reduction in lost customer hours to end of Period 9. Golden Whistle for most improved, Silver Whistle for second most improved.

• Outstanding Operator/Operating Team. Golden Whistle for an individual / operating team that has gone above and beyond in making a contribution.

• Special Award. Each year the IRO judging panel chooses an individual or team and awards a Golden Whistle for special acts of courage, selflessness or quick thinking.

HOW DO I ENTER?

Most of the Golden Whistle awards are made on the basis of statistical information compiled by the industry and do not require companies to enter. There is one category for which the winners are selected by a panel of IRO judges and for which entries are invited:

The Golden Whistle for the Best Individual Operator / Operating Team – awarded each year to an individual or team that has gone above and beyond in its contribution.

To nominate an individual or team for the 2020 awards click here.

Featuring papers on topical operating issues. The programme will be confirmed nearer the event.

Tables of 10 at this event cost £1450 +VAT, sponsorship details available on request. Contact Dave Lane via email david.lane@keypublishing.com or call on 07795 031051